Robbie Robertson
Contact from the Underworld of Redboy
By Bob Johnson, Alamogordo, NM

If you’re here reading this by way of Robbie’s old stomping grounds, "The Band", you have taken a wrong turn. Go back to the sign you passed which read "Now Leaving the Land of Rock and Roll". The next sign in (the title of the album) will tell you that your are now entering Native American ground, the home of "RedBoy".

As a reviewer of the album with no contact with the artist, I would be way off base to suggest what Robbie’s intent was in producing this album beyond expressing his musical talents the way he wished. I can only offer one person’s comment on the outcome of his latest effort.

Anyone who would buy this album in anticipation of more of that Dixie-rock-jazz-blues sound, almost unique to The Band, would probably be disappointed. The first track suggested that to me that Mr. Spock was sent to Earth by Captain Kirk to produce an album with Paul Simon’s soulful entourage. I thought (hoped) that the next track (well, maybe the next track) would meet my expectations - some foot-stomping music, maybe a flashback to "Up on Cripple Creek". Instead, this unique rendering of the former "Band" member transported me to Africa ,Arizona, or NYC, kicking back with the "Home Boys" - no "Red Boys" anywhere sight.

Actually, I am lost for words to describe this very different sound that obviously talented artists and other music professionals worked hard to produce. Sorry, but I’m a hard-core rock and roll junkie. Maybe this music is along the lines of "Techno", but don’t know if I’ve ever heard "Techno" music, so…

I’d be committing reviewer’s heresy to give this album a thumbs up, only because someone would write in and rightful ask: "Excuse me, Bob, but what part of "RockSpot" don’t you understand?."

One last parting shot. This was not a poor musical effort. This album would be enjoyed by those who appreciate relaxing music with a Native American and African flavor. And high marks on the sound production, including the mixing. 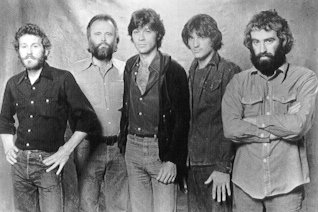 Time Out Of Mind

Dylan is proud of his new album Time Out of Mind, and rightfully so. The album, released September 30th, is far and away his best sustained work since the mid-70's; it reaches the exalted level of Blood on the Tracks. His new songs -- his first set of them since 1990 -- are embittered, heartsick and weary: "When you think that you've lost everything, you find out you can always lose a little more," he sings in a rasping voice whose familiar cracks have become potholes. It's the voice of a 56-year-old man who's not hiding any of his bruises. Yet the character who runs through all the songs on the album seems nothing like the relaxed, buoyant songwriter who's talking about them. Asked who the woman was who broke his heart in song after song, he laughs and asks, "Which one? Which song?"

Year of the Horse: Neil Young and Crazy Horse Live

I caught Neil Young and Crazy Horse when they played the E-Center in Camden, N.J. during the 1996 summer tour. It was an awesome two hours plus show that featured a few of Neil’s newer songs from Broken Arrow, seemed to completely ignore Mirror Ball, and favored selections picked from quite a few of Neil’s collaborations with Crazy Horse. The group’s concert delivered powerful versions of songs like "Like A Hurricane" and "Cortez the Killer."

Wanting to get that concert feeling again, I was really looking forward to listening to Year of the Horse. In most respects, this two-CD set did not disappoint. The first thing I noticed is that the sound was really true to the concert. It really captured the band’s dense, guitar-powered wall of noise, and Neil’s voice sounds pretty good throughout. For those, like me, who just like listening to any of Neil’s long jamming with Crazy Horse, you’ll get an earful of the stuff on this one. I think a good example is "Big Time" which was one of my favorites at the concert. It sounded just as great on the CD.

While I can’t think of too many songs offered here that I didn’t like, I still found myself questioning the choice of tunes. How could the folks who put this album together pass up on so many of the great songs Neil played during the tour. I already mentioned "Hurricane" and ‘Cortez," and could probably come up with a bunch more. For example, this would have been a great opportunity to give us fans a kick-ass version of Rocking In The Free World," which blew me away at the concert. And what about some of the selections from Neil’s acoustic breaks. The closest they get to that on Year of the Horse is a real bluesy version of "Mr. Soul" that sounded like it could be Buffalo Springfield. What about the amazing version of "Heart of Gold" that Neil did solo that night I saw him. That was great. Why include "Pocahontus", which was already on the unplugged album.

Well, if you are a Neil fan you know he is an eclectic, unpredictable performer, and I guess the choice of songs offered here are true to form. If you haven’t bought a Neil Young album lately, you should consider adding this one to your collection. I think it will appeal to those folks who liked Live Rust, but will probably be of less interest to those who prefer the quieter, really different versions of songs on the Unplugged album. Year of the Horse will definitely give you the good Neil sound you crave, and will turn you on to a few tunes you probably haven’t listened to much. I’d hardly ever heard "When Your Lonely Heart Breaks," and it quickly became a must-listen-to song for me. And this is from a guy who has pretty much worn out the "Southern Man" track on his Four Way Street cd (never heard the "Loner/Cinnamon Girl/Down by the River" acoustic medley bonus track on the cd? Go out and get it today. A must for any Neil fan).

Back To New Releases